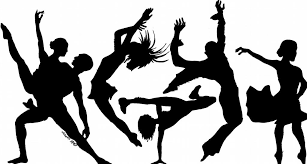 And warrior dances, sometimes incorporates the balanced swaying involved in avoiding the enemy's blows.
Same for verbal sparring.
Only, some, fear gripping their heart, do nothing but twist and turn, hoping to avoid the final stab, never succeeding in affecting a scratch on what attacks.

Performance martial arts is meant to exercise and prepare the fighter for the real thing, but when all it is, is a performance, one needs no opponent, or a reality at all.
One spars with the ghosts in one's mind, and damns the real deal as another illusion.
You will find many of these types in philosophy forums, and/or in lecture halls, and schoolrooms.
When the performance is over, and a satisfactory effect has been made, in theory, they retreat to the reality of their safe, predictable world, which they hate, and love.