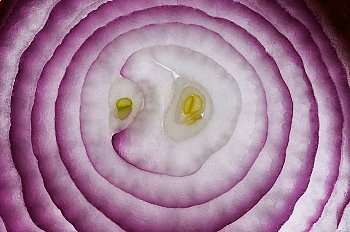 The center of the onion and/or the planet’s core would be a regression towards the past/nature.
The planet’s subterranean levels would be the evolutionary stages of man, reaching the surface which would symbolize present-day man, modern man. 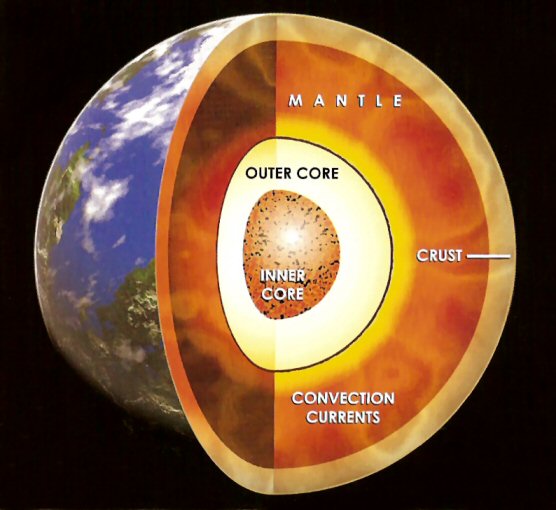 Up to this point we are describing the genetic essence of the species human.
The memetic structure begins from there, as a projection/extension of the genetic, creating an atmospheric/memetic covering. 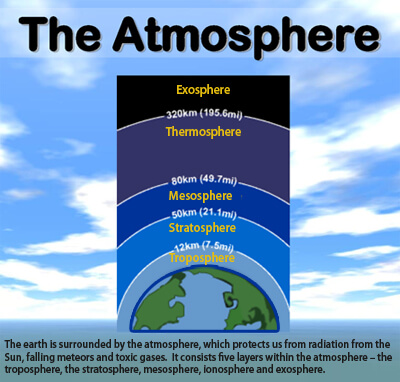 The atmosphere, like the onion, has multiple levels, or skins, each representing the various stages of memetic development, with their own techniques/technologies, as further sophistications of the previous ones.
One layer of technique/technology resting upon another, constructing the atmosphere (meme). The meme is pushing down on the planet’s surface forcing it to level down, if not for the convulsions coming from inside, and the disturbances coming from outside, if and when they get through.

Meme is an extension/expansion of a planetary body – enveloping it with a magnetic field representing the gene/meme field of influence.
The strength of the gene (planet mass, rotation speed) produces its gravitational pull, determining the depth and density of the memetic sphere (atmospheric), which in turn produces the magnetic field of repulsion/attraction.
The meme is a shield, against world, wrapping around the gene, and pressurizing it – repressing it, or expanding its time/space effect.
Each layer of technology is a further extension of the shield, or an expansion of the gene in space/time.
If and when this field of protection/deflection becomes strong enough, or thick enough, to protect the planet from meteors, or external forces/radiation, disturbing its inner workings, surface dwellers (superficial moderns) can construct their utopia’s, feeling safe within the multiple onion layers of shielding.
Slowly the planet’s inner core cools, stopping any disturbances from erupting on the surface. Atmospheric pressure, along with the planet’s mass contributes to its surface heat/coolness.
In time these surface dwellers might forget about what lies outside the atmosphere or under the surface crust, or beyond the magnetic field, manufacturing a technological artificiality that is no longer directed towards reinforcing the shielding but can turn inwards to manipulate the planet’s surface, increasingly digging deeper into the earth to alter how it appears on the surface (genetic manipulation).
Atmosphere and magnetic field create a cocoon within which the planet can manipulate itself (masturbate).
Language is part of the techniques/technologies atmospheric effect.

Nihilistic idea(l)s act as pollution, intervening upon the planet’s natural cycles to manufacture an idealized surface environment.
As long as there is a technological field of protection offering “freedom”, superficial moderns can manufacture surface progress – turning away external forces, the planet is place in a hothouse of increasing entropy.

Maintaining this structure is automated, engaging the external cosmos only to preserve surface liberty - or detached creativity unconcerned and no longer referring to the external but only selectively, to gain lost insight.
Techniques/Technologies acting as filtering levels of atmosphere, permitting some outside radiation to enter, and trap it, and allowing the unwanted to radiate outward, at night - the rest is deflected by the magnetic field.

The purpose of these techniques/technologies is not to explore the cosmos, by understanding it, but to prevent it from disrupt the planet's surface where the artificial world is being built.
When the external indifferent world is rendered, relatively, innocuous the internal can freely play, concerning itself only with how to manipulate the surface of the planet.
interest in the external is only for the purpose of preserving the atmospheric pressure and the magnetic field - it is selective.
Internally all is open to suggestion, allowing for the madness of creativity to take over - like a child freely playing his fantasy games when the parents are hovering around.

If we hold historical accounts to be accurate, and Biblical accounts to be half-truths, then the historical figure of Jesus was a mongrel: half-Roman, half-Semite; product of rape, or of a woman’s lasciviousness, that became part of his message of forgiveness, transmutation him into another kind of mongrel: a god-man, or to put it into Hellenic contexts a demi-god.
A mongrel bridging the spiritual contradictions between Aryan and Semite, and then heaven and earth; metaphorically mind and body.
Christ body, and blood, is, to this day, the symbol of this digestive transmutation.
But which side was sanctified, deciding dominance, and which was demonized.
We can gauge this from the outcome.
Christianity, as a later product of this bridging converted the Semitic side into a “chosen” divinity, and the Aryan side into the sinful, that which one must endure and make amends for, reversing worldly hierarchies, as all Nihilistic idea(l) do.
Saul used the mongrel Jesus as the third-element in his alchemic mixture of incompatible elements.