Speed of analysis (cognitive efficiency) is a important aspect of evaluation/interpretation = judgment.

Objectivity does not mean a static thing, or an absolute.
It means the efficient/effective interpretation of (inter)activities resulting in a outcome mostly beneficial to the organism, or an outcome closer to the organism cost/benefit projections.
Objectivity = subjective approach to harmony with world Flux - elimination of internal corrupting sources of data which slow processing speed, and/or lead to an erroneous/flawed projection of cost/benefit. 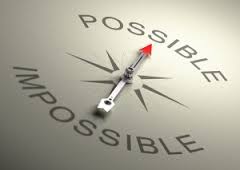 Assessment of possible and probable is a judgment based on the organism's perception and evaluation of world.
Organism evaluates costs/benefits, and charts a source through the fluctuating (inter)activities.
Using precedent is using past = nature.
Knowing and understanding past/nature determines what is more and what less probable, factoring in the unpredictable (random) and the unknown constructs a approximation = probability.
Within Flux, constant fluctuation of patterned and non-patterned energies possibilities are reduced down to probabilities = order.

Absolute Order = singularity - one probability - certainty.
Absolute Chaos = infinite possibilities - no probabilities - all is equally possible (uniformity).
Both absolute order and chaos are Nihilistic projections with no precedent - they represent the binary poles of the Nihilistic paradigm - dualism.
If taken as symbols they help the mind orient itself - if taken literally, as they are in Modernity, they become cognitive limits, represented by words with no references in world = linguistic (memetic) mind traps.

Absolute Order = positive Nihilism (masculine Nihilism) - god, one, thing, whole, telos... or any word denoting a "positive" to the organism (subjective) idea(l) with no precedent and no reference in world.
Past/Nature is rejected as a source of validating probabilities, "liberating" mind from word to indulge in fantasy, or the projected idea(l) contradicts precedent and appearance using a reconfiguration of abstractions/noumena.
Absolute Chaos = pure Nihilism (feminine Nihilism) - rejection, destruction of existence as it is.
desperation, that may lead to suicide (cessation of awareness), or submission to any version of positive/masculine Nihilism.

Another method, also using imagination, is the cognitive referencing of a noumenon (abstraction = mental model) with phenomena = theory.
Quality defined as the quantity of noetic references to phenomena, establishing an evaluation/approximation of accuracy without the more reliable direct application method = pragmatism.

All this modernistic obsession over subjectivity and perspectivism, is part of the Nihilistic ideology, producing a multiplicity of disconnected, from reality, ideals, attempting to bury reality beneath idealism, with mountains of words, delivered in that usual cynical way that feigns confident indifference.

By selling the ideal that all judgments are of equal value, the past is rejected as the source of mental differences.
Reducing the costs, and selectively benefits, a manufactured parity is maintained, within which the romantic idea(l) that "all men are created equal" presents a social myth that ought to be realized, without considering the repercussions of such an intervention, let alone its pragmatism.
All judgments are equally good/bad when moralized, and when the community is held accountable for every member's failings - mental Marxism, built on Judeo-Christian ethics.

In a bee hive a singular bee's weakness is compensated by a community of bees, producing an average the entire beehive enjoys the benefits of, and is burdened with the costs.
In such a social structure all bees in the beehive are, for all intents and purposes, equal, even if one is healthy and another is missing a leg, or was born with a defective eye, or persistently fails to find and gather pollen.

Natural selection will have the last laugh, when you protect and you compensate for defective genes; in time the unproductive bees will outnumber the productive ones and the entire hive will die... if it were the case that bees live in disharmony with nature, are protected from natural culling, and do not throw out drones, every year.
A beehives apparent altruistic internal harmony has its own dark side.

The idea(l) of parity of judgment is so absurd and naive, only minds born and raised within a sheltering system, could be convinced of it.
Naivete, born of inexperience, or cowardice coming out of an inherited feebleness of spirit, broken apart by a sudden and vicious contact with reality, would fall for such nonsense.
Natural selection, alone, demands a divergence in quality, with costs/benefits seperating the superior form the inferior.
With no disparity in quality of judgment, measured against an indifferent objective reality, in flux, we would have to return to the God hypothesis to explain how intelligence evolved, and why it has proven to be such a decisive organic trait.

Consciousness = perception of pattern, of order.

Judgment = evaluation of pattern (inter)actions in the immediate and/or distant future using past/nature as precedent.
Will = movement, focus, of aggregate bio-energies towards an objective - intent.
Objective = projected goal, idea(l), based on past/nature (precedent), or detached from past/nature, in degree or completely (Nihilism)

Outcome = the attainment of the projected goal, resulting in the awareness of an overestimation, or underestimation, with accuracy being a measure of degree and never an absolute.
The measurement is one of cost/benefit.

Judgment evaluates cost/benefits in the movement toward the objective, and then in relation to its attainment, after it has experienced the (inter)actions of this movement towards, adjusting the outcome after-the-fact.
When the idea(l) is a product of nihilism, it is unrealistic, meaning it can never be realized, having no precedent and no references to past/nature.
Nihilism is a perpetual movement toward the idea(l) which can never be attained to any degree, necessitating hypocrisy, and producing cynicism against all projected idea(l)s.

Objectivity is a word describing the approach towards an accurate evaluation, without attaining it - it is a measure of the subjective mind's quality of judgment determined by the outcome.
Nihilism's inability o attain any degree of its own idea(l)s exist in a perpetual state of pure ideal - ideals forever in the beyond, or the future, mocking all idea(l)s to hide its own delusional detachments - it relies on hope, the forever promising "will be", seducing all failures, all cowards, all poor quality minds to its idealized potentials - leveling down to the lowest-common-denominator: parity in weakness, or the equality of the sinner, based on the negation of the missing positive = Nihilism.
If no absolute is possible all is equally feeble, ignorant.
If there is no absolute morality, no one truth, no purpose or meaning, to existence, then it is negative - the missing one, positive, justifying the absolute nil: Nihilistic dualism, binary "logic", where the absolute is taken for granted - if not 1 then 0.

Objective posits a "problem" only for the subject, for it has no intent, and no final destination, no aspiration to become problematic before.

The subjective mind, is confronted by the objective world of continuity.
It aspires towards destinations, and is confronted by indifferent, of difference.
It's judgments (interpretations), adjusted with every experience; every conscious (inter)action, with patterns and non-patterned forces, exposing a divergence between its own idea(l)s and the world, constantly in flux.
Cost/Benefits are re-evaluated, the course altered to accommodate what has been learned, or reaffirmed, in relation to its own fluctuating energy balances; organic hierarchies altering psychology, personality.
Subjective mind does not will the world's objectivity, it translates it, using repeated events, establishing a pattern it must take into consideration when re-navigating the churning waves of existence.
Liking and disliking what confronts it is not an issue.
If the goal is maintained as desirable, a new course is charted.
If it is evaluated as undesirable, given the cost/benefits as these are determined not by the world alone, but by the individual's own fluctuating patterns, in relation to it, then an alternate goal is found.

God is alive and well, living under a new pseudonym among the secular humanists and other communities of Modern Nihilists, worshiping upon the altar of subjectivity.

Immutable past, experienced as determinism, looks back upon that which has already been determined, by previous (inter)actions, as if it were inevitable, part of a plan: God's will, and incomprehensible reasons.
God as order, underlying all existence.
Omnipresent God, found in all things, as an irrepressible intent. man submits to, after-the-fact, as an acceptance of causality as inevitable, directed by complexity so intricate as to evade human understanding and perception - the mystery of God.

Chaos (randomness), as the Devil, they reject, as pious "good" thinkers.
The trickster who pretends to be other than what he is - order, pretending to be random, when it is but another expression of order, as God.

In all things order and a telos, where telos is redefined as recombining order, bringing forth new and exciting forms - God as this change of its own order, excluding itself.
The sum not characterizing the whole.
God as this immutable whole, defined by its internal mutability.
God transforming out of its own immutable parts - the internal contradicting the external, where the mind has projected itself "outside" time/space to appreciate the divine using generalizing/simplifying imagination.
The "outside" is really the observing, organisms inside, externalized - projected as a hidden (ideal) the real buries in its "illusions".
The Nihilistic ideal is fixed, out of space/time, annulling the experienced/empirical which exists as time/space, guiding, directing existence in its multiple transformations.
"Thy will be done"
In all phenomena order is hidden, or an intent - everywhere consciousness.
The larger Self, made-up of many smaller selves, expressing itself through them as action.

Man confused and trapped in the third level of intentionality

Will is how the organism communicates with the {sympan} kosmos; consequences (cost/benefit) is the response.